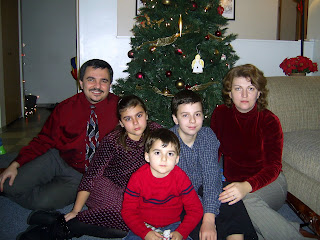 Greetings to all of you again from Vancouver, Canada!

We are getting close to the celebration of the birth of our Lord Jesus Christ and to the end of 2007. If you are anything like us, you are probably astonished by the rapidity of changing of times. We are already in December and we are already very late in keeping you updated with the latest news of our family.

This year we all have seen how God worked wonderfully in our lives. Starting with my Master’s graduation (George) from Regent College in May, continuing with the opening of a new vision for the English ministry in North America with Surrey Chinese Baptist Church starting with August and ending with the most recent completion of our legal status in Canada in October. All these events, adding our anniversary and all children’s birthdays are a constant reminder of God’s blessings that are not stopping for us, but rather renew every year.

Nicoleta is very involved alongside with me in the English ministry of our church. She is helping a lot with the children and Sunday school activities. Very recent she finished a prerequisite for starting the nursing school in January 2008 – her dream so far. For now she is also working.

Our children have grown up a lot. We realize this only when comparing older pictures. This year we have seen a better adaptation to the Canadian schooling system. Joshua is getting closer to his Romanian school performances. Timeea is very friendly and very much integrated with her friends from church and school. They both remember their friends in Romania and keep connected. George-Philip grew a lot too. He is the one who speaks mostly English in our family although we keep talking to him in Romanian.

Compared to the last year's situation, the present development looks more stable and settled. However we are all praying and building ‘great’ plans for future. Undoubtely there are a lot of challenges for the next year. We have not forgotten the Muslim’s muezzin call to prayer… is the wake up call of missions for the entire Christian world. We wish that we should get more involved in international mission alongside our church. Nicoleta’s deep wish is to finish the nursing’s school, and I would wish to have the opportunity to continue my studies in missiology. We subject all of these to our God’s will. May that He would work according to His will….

Please pray with us so that:

- Nicoleta will start and finish the nursing school with success.

- that the involvement of our church (Surrey Chinese Baptist Church) in external mission will grow.

- that God will open new possibilities for me to further studies in missiology.

To all of you MERRY CHRISTMAS AND A HAPPY NEW YEAR!

Posted by Unknown No comments:

Welcome to Dumitrascu's blog page. We are currently living in Vancouver, Canada and glad to share bits and pieces of our family's life and journey. Thank you for your interest in our journey and if there is anything that you like to share with us, please let us know!
Best,
The Dumitrascu's